This week I was pleased to present another Intellectual Property Workshop for SCORE.  My presentation usually covers Copyright and Trademarks.  This evening, we discussed the “Monkey Selfie Case.” Briefly, a British wild-life photographer, David Slater, was attempting to photograph a macaque on the Indonesian Isle of Sulawesi.  He claims to have done all the preparatory work, but the macaque tripped the shutter, taking the “selfie.”  Ownership of this photo became a hot topic of dispute.  Slater claimed ownership stating the monkey was acting as his assistant and claims to hold the copyright in the UK.  The U.S. Copyright Office said that no one owned the copyright even using it as an example on its website.  PETA, on behalf of “Naruto” (the macaque), filed a lawsuit claiming its ownership and offered to administer the royalties through an animal related trust for its benefit.  On a Motion To Dismiss, the Federal District Court denied PETA’s claim stating that for animal ownership of a copyright there would need to an act of Congress.  So for U.S. purposes, the photo is considered to be in the public domain and copyright still takes the human touch. 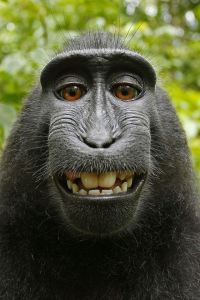